You know how I know for sure that Spring has slowly and gradually creeped into Summer? The crows. Those blasted, angry, noisy crows! Now, I love animals as much as the next person – perhaps even more. Especially cute fuzzy or furry ones. But I have an intense hatred for crows. Before you get all uppity, let me tell you why…

Last year, when John and I still lived up near the University of Victoria, I was leisurely meandering home from school… Backpack in hand, minding my own business, generally loving the new Summer sun and the way it beat down over my flip-flop clad little toes. The ocean breeze was rustling the leaves in the trees and I felt good. Relaxed. Calm. Happy, in the most exquisite sense. And then it all came crashing down around me.
I felt a charge of air above my head, rearanging my hair into a nesty mess over my face. What the hell?? I looked up – nothing there. Weird. And then again – Woosh! WTF??! I looked up – there, sort of hovering above me was this giant, big, black crow. Stupid bird, I thought. What are you doing? Assuming the little guy was confused I waved my hand above my head and continued down the path. And then it happened. Suddenly there was this loud, piercing, unimaginably horrifying “CAW” “CAW” “CAW”! The leaves in the trees held their breath, cars rerouted their direction, and the sun shuddered behind a cloud. The bird wound up into the sky as high as his wings would take him and then…. dive bombed me. Sharp tallons, pointed beak, massive wings flapping about my head, “CAW” “CAW” “CAW”… He chased me down the street, repeatedly taking aim and viciously bombing my head – I think he was after my eyes. 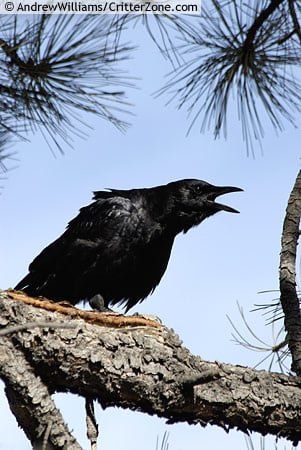 Confused and terrified, I bumbled into the house, recounted my story to John, and tried really hard not to cry. Taking that same route over the next week, I realized, this wasn’t a one time occurrence. In fact, this little fucker later chased me through on coming traffic, into bus shelters, and instilled such a deep fear in me I even tried calling animal control. There was nothing they could do. This was a yearly “issue” that just had to take it’s course – the babies were being born. They were nesting. So that’s what happened! Their babies must have been near by and I was seen as a threat! But why me??? And why did they seem to recognize me even though I tried donning disguises, changing travel routes, and/or riding my bike (a quicker get away)….?! I’m the last person that would want to hurt their babies. Stupid, ugly crows.

Enough about the past. Let’s get to the present. Last week as I walked down fifth street, I wasn’t exactly attacked, but I was followed, glared at, and certainly “CAW”‘d at by a couple of birds. I struggled not to panic and bolt. As I passed this guy on the street, he so kindly whispered “they’re going to get you!” Asshole.  This morning, as I innocently tried to harvest a couple strawberries from the garden for John and my breakfast I was circled and harassed by the same birds. They won’t leave me alone! I don’t know what to do but I am actually and sincerely, traumatized. I have a(n) (ir)rational fear of the little buggers now and they only seem to grow in size every year. I hate crows. I. Hate. Crows.
So, that’s how I know Spring has crawled into Summer. But enough about them – it’s making me stressed out. You know how else I know that it’s coming to be Summer? I start making pesto. Actually, this is the first time I’ve ever made it and I got the inspiration from Glutton for Nourishment – the same lovely blogger who also inspired this. Luckily, my pesto worked out much better than that.
You can sub pretty much any green and/or nut, depending what you have on hand. Pesto is traditionally made with basil and pine nuts – however, I had some spinach on hand from our CSA box via Saanich Organics and some almonds because I put them on salad all the time. Hence spinach almond pesto. But use whatever you have! Experiment! See what flavors you can come up with!
Print