This is the second edition of wine wednesday, and the first to feature an actual wine. In case you missed last week’s edition (featuring a basic vocabulary of wine terminology), click here.

The following is my most favorite wine of all time. I was a little unsure about posting this at first. See, this wine is not the cheapest of wines – though it also isn’t the most expensive. It’s not the most popular and known of grapes – though it isn’t unheard of. And it comes from a country that I tend to avoid when buying wine – yes, I’m a bit of a snob. But, after much deliberation, I thought to myself, “it’s the first actual wine post! You should begin with your first (primary choice) wine!”… And so now, as I’ve been known to call it, here is the thunder-cock of red wine: 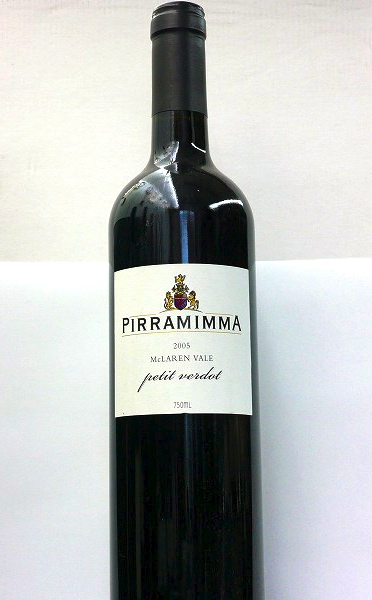 Wonderful audience, meet Pirrammima’s Petit Verdot (pronounced Peh-tee Vehr-doe). Stemming from the McLaren Vale area of Australia, this wine is big, bold, juicy, and a bit of a punch in the face. If you don’t like big red wine, you aren’t going to like this. If you do – you just met your soul mate.

Initial fermentation (where the grape’s sugars are turned into alcohol) took place in concrete vats and then finished off in French and American Oak. Such brewing has developed a wine with a nose of violet, blackberry, cherries, mulberry, and vanilla bean. Flavors erupt, exhibiting spicy plum, forest floor, and tangy cherry. The tannins (the stuff in red wine that makes your mouth dry and leave an after taste) refuse to leave your mouth, clinging to the very crevices between your teeth. This wine ain’t lettin you go – but then again, you won’t let it go, either.

I tried the 2006 version this week – though I think 2005 was better. This year’s vintage however is still worth the $30 price tag. Save it for a special occasion (yes, this includes nights alone in front of the television watching Reality Bites and mowing down on dark chocolate)… Though I like it with BBQ’d Blue Cheese Bison Burgers…

My glass is empty… oh no.. I’m gonna go fill up – you should too! What do you like to drink when it comes to wine? Do you like something huge like this wine? Or something lighter like a pinot noir? Or maybe you don’t like red at all – what about whites?

XO! Happy wining!! (and whining. after all, what else is wine good for?)…