I’m going to let you in on a little secret, my darlings: I love Italian food. Like, insanely crave and need it. A lot.
….Okay, maybe that isn’t such a secret.
But I have this weird thing about risotto. Don’t get me wrong – I love me a big fat bowl of the stuff. I’ve never been known to turn down a bowl of cheeey, carby fantasticalness. Ever. Which is probably why I can’t fit into my swimming shorts like I used to. That being said, I have this weird thing about risotto. 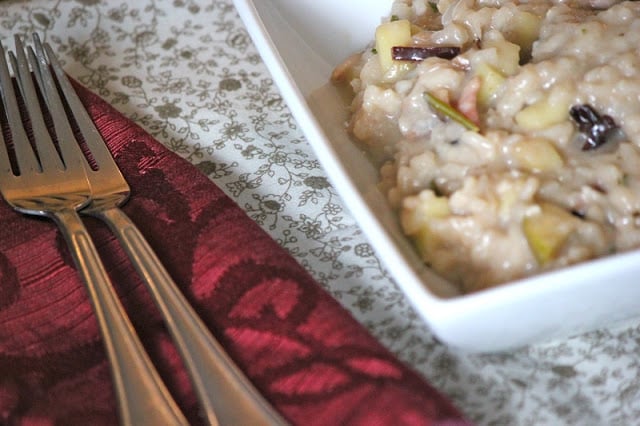 When imagining flavor combinations for the stuff I always go, “yeah. but it’s just/still risotto”. Like, despite what I throw in it, it’s still just creamy* rice.
But I don’t blink an eye when coming up with pasta renditions. Or polenta. Or even sandwiches. Yet they’re still just noodles. Or cornmeal. Or bread. So what’s with my reluctance when it comes to the ‘rizzo? It’s funny how our synapses associate certain ideas with certain feelings and certain foods and certain life experiences.
Basically, what I’m trying to say is, I am unfairly biased against risotto and it’s potential to wow my taste-buds whilst I grant other carbo-based dishes perhaps more of their fair share of leniency with respect to originality.
….I think I’m thinking this through too much. It’s rice. Right. Just eat.
To prove myself wrong I made an apple, walnut, bacon risotto for dinner last night. And it was nothing at all like my recipe for truffled wild mushroom risotto. Except that it was spectacularly awesome. Especially right now when apples are at their peak.
Note to self – you need to be more open minded about risotto. Especially Apple Walnut Risotto… with bacon. 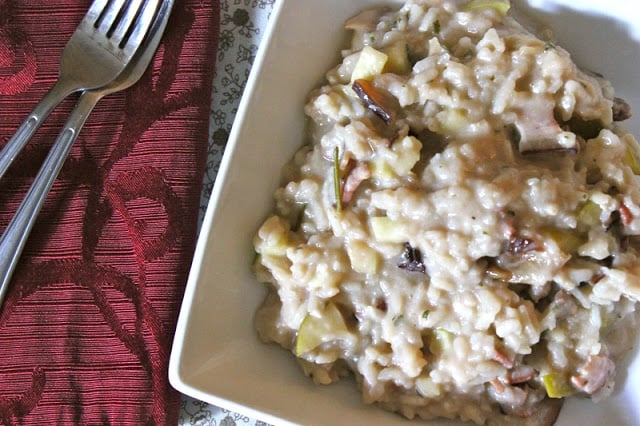 *I’ve heard from a few different people that risotto should never have cream added to it. That the rice itself, if massaged and loved correctly will be creamy all on its own. Cream = bastardizing the dish. What do you think?
apple risottoapple walnut risotto reciperisotto with bacon
Pumpkin and Potatoes with Seared Saganaki English Lunch: Beans on Toast