Good morning my darling readers!
Today I have a special treat for you! Beth of Young Idealistic Baker is visiting us with an uber fun guest post swap! She’s a hoot and one of the most generous and honest people I’ve had the opportunity of meeting. I’ll be keeping her.
Summer is on it’s way out now that September has arrived. And while I know I’m going to get my little greasy hands slapped for this, I’m glad for it. Bring on the Autumn! I’m ready! And as a send off to Summer, Beth and I are posting recipes for Fresh Summer Berries. Oh yes. You love it.
And once you’re finished reading hers, visit Beth and I at her blog to see how I can’t follow directions (and see what I made).
Enjoy!
_______________________________________
When I first discovered Kristy and Gastronomical Sovereignty, I was completely smitten not only with her great recipes and photographs, but also with her cheeky humor that shines through on her blog. We started chatting and when she suggested creating a guest post, I was nothing short of thrilled.
Kristy and I have both created and featured “failed” galettes on our blogs, failures only because they didn’t turn out as beautiful as one might have hoped. Word to the wise: anyone who regularly uses the expression, “easy as pie” to describe simple tasks is mistaken. The only thing easy about making pie is messing it up. There is a definite art to making great pies and it’s something I’ve tried hard to master since I started baking several years ago. 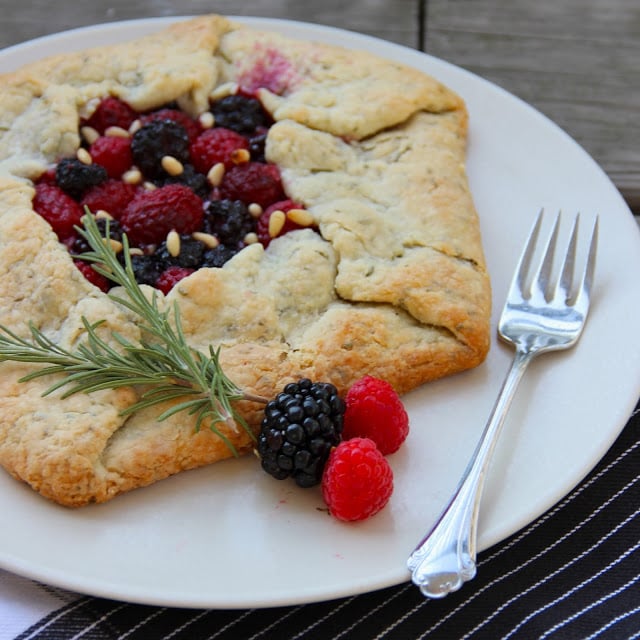 Galettes are the slightly more forgiving, rustic-looking French cousin to traditional American pie. Since Kristy and I have had similar sorry experiences with galette making, I suggested we both try making galettes again, this time with the support and encouragement of a fellow blogger.
To determine the star ingredient and guidelines of this challenge, we left things up to fate. A few coin tosses sealed the deal: Kristy would create a sweet berry galette and I would create a savory berry galette.
Have you ever tried to make a savory dessert from berries? Their perfect summer sweetness compliments any number of dessert-y flavors from vanilla to chocolate, but I don’t often think to mix them with savory flavors. This proved to be a bit of a challenge. My first thought was to pair fresh berries with a mild cheese like goat cheese and toss in some fresh thyme or rosemary. This concept evolved slightly to encompass Brie and rosemary, and then went through one more evolution to become the wine-soaked berries, Brie and pine nut galette with a rosemary crust that you see here today.
Since wine-soaked berries, Brie and pine nut galette with a rosemary crust is such a mouthful of a name, and since I can’t shake my love of puns, this dish shall henceforth be known as the Wine and Pine Galette. I will whine for wine until it’s given to me and pine for more when it’s gone. Add the pine nuts, berries and rosemary, and we’ve got ourselves a great savory galette!
Print