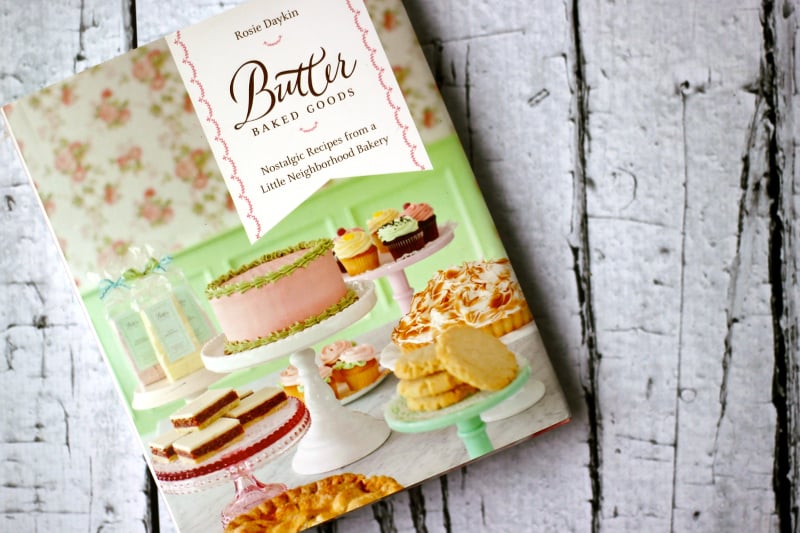 It’s no secret that I’m not much of a baker. But I try. Because I love carbs. And now that I have a mint green Stand Mixer, I’m trying even harder. Like, to the point that if we met on the school yard, you’d be pulling my underwear up and over my head. Because no one likes anyone who tries to hard. That’s just annoying.

Yep. That’s me. I can’t help myself. I’ll use any excuse to rub up and down that shiny, minty-green exterior. Baking. Cooking splatters. A night home alone. I love it. In fact, I think I should name her. After all, we’re spending so much intimate time together, I expect this will be a long term relationship and I should know her name. 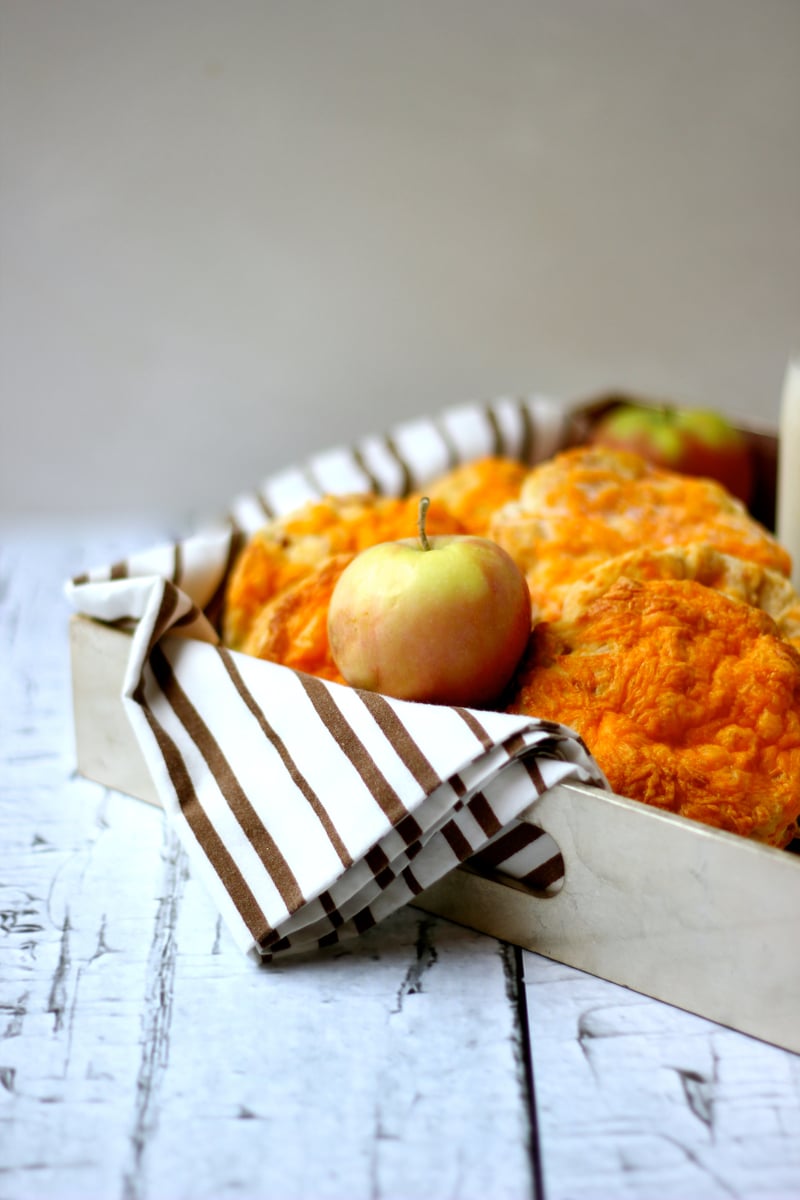 So when I was approached to participate in a 16 blog wide cookbook & treat giveaway from author Rosie Daykin and Vancouver based bakery Butter Baked Goods, I was all over that shit. Like I said, any reason to cuddle up to the mixer. And if I was giving away a copy, I’d definitely have to try out a recipe or two.

Not a problem; Challenge, accepted.

At this point, I can say with absolute and positive certainty, that I’m fatter because of it. But it was worth it. Because I made the Apple Bacon Cheddar Scones on page 51. Not that the page number has much to do with the caloric content of a scone, but bacon, bacon fat, cheese and copious amounts of flour do. And I’m good with that. Paired with a Cinnamon Apple Whiskey Sour, it’s pretty much the perfect afternoon. Fall in my mouth. Get it? Got it. That was an order. More please. 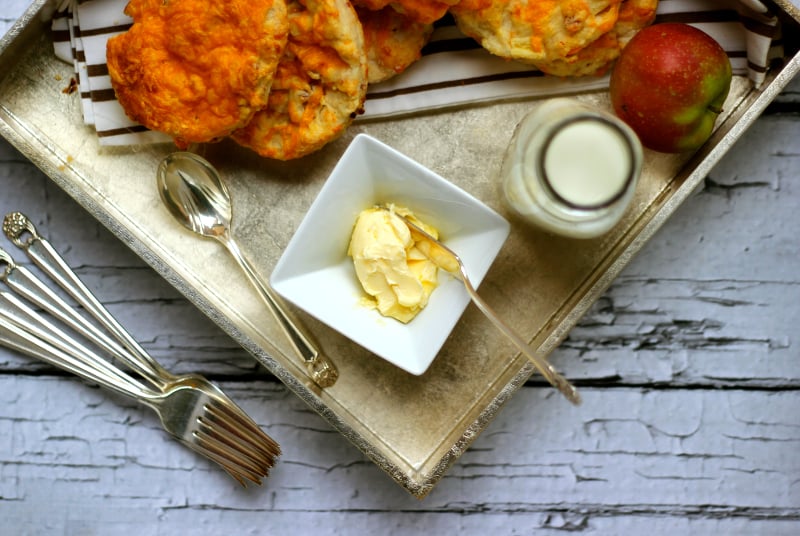 I’ll tell ya though – that stand mixer is a mess waiting to happen. Sure, there’s a lot of flour in this recipe (5 cups worth) and that’s a lot of scones. But just a small word of warning to the wiser than I: Start the mixer on low. Or you’ll end up with a flour cloud higher than River Phoenix.

But as Charmian Christie says, you can’t trust a tidy baker. So I’ll get messy. And create excuses to rub down my stand mixer. Check out the “About” page for the Butter Baked Goods Cafe and you’ll see these ladies know how to get dirty too. I think we can trust them.

These scones were exactly what I had hoped for (and simple enough to make considering I’ve never made pastry before!): bacony, cheesy, appley, flaky and loaded with carbs. Sorry paleo folks; With recipes like this one – and the other 15 that were made by the bloggers listed below – I won’t be joining your ranks anytime soon. I’m too busy eating Butter Baked Goods. And damn happy about it too. 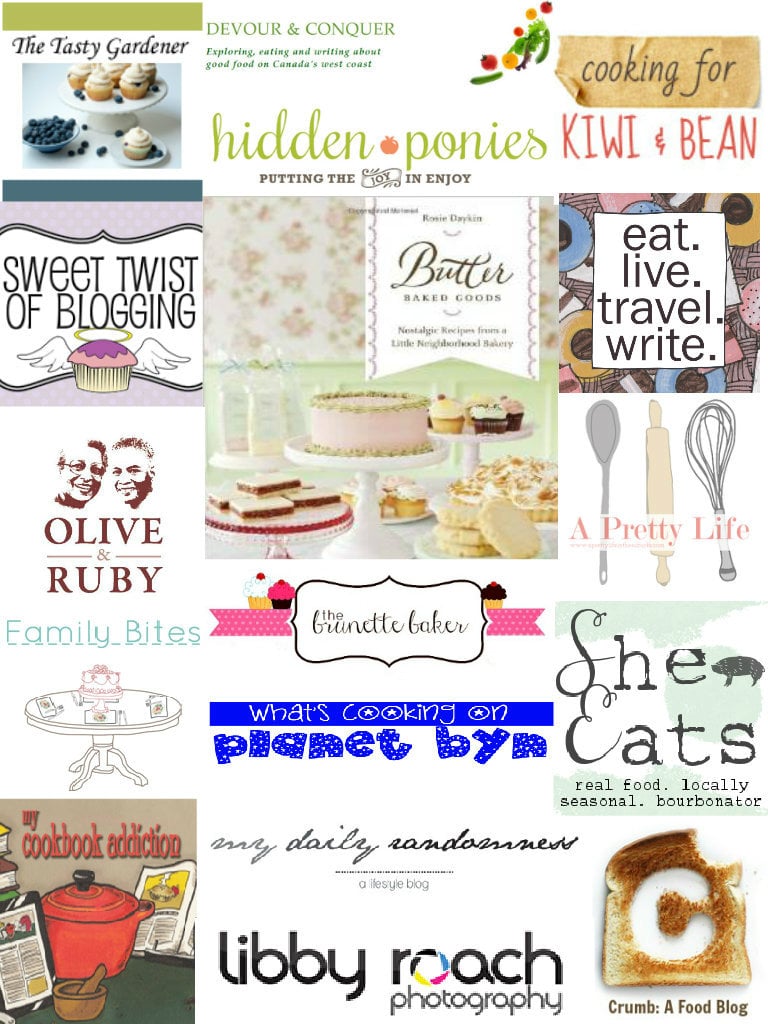 // Check out the 15 drool worthy creations by the other Butter Baked Goods Giveaway bloggers: //

One very lucky reader will receive a personally signed Butter Baked Goods cookbook from Rosie as well as a delicious box of incredible Butter treats right from the bakery! A $125 value! Holy moly wack a doly!

ENTER THE GIVEAWAY:
* Contest open to Canadian & American mailing addresses only and who have reached the age of majority in the province, state or territory in which they reside.

MANDATORY: Simply leave a comment below and tell me your favourite baked treat!

BE SURE to click the widget options below for both mandatory and optional entries because you can’t be entered to win if the widget doesn’t know you’ve done it! Your email address is ONLY used to contact you if you’ve won, not for any other purpose, and is never made public.

Disclosure of Material Connection: Random House DID provide me a review copy at no cost. Regardless, I only recommend, giveaway or share products or services I use personally and believe will be good for my readers. All opinions, words and information here are entirely accurate and a reflection of my true experience and were not influenced, in any way, by the above mentioned products or companies. Opinions and views are my own. Because that’s how I roll, yo. I’ve never been one to shut my mouth – I’m not going to start now.